18 different Hijab Styles to Wear Your Hijab with SWAG
Filter by Tag
best hijabs online 2018 hijab
Stay up to date with news and promotions by signing up for our weekly hijab newsletter. Subscribe

Seeing athletes breaking barriers across the globe is often very inspirational. But watching a Muslim woman compete and excel in her sport makes our hearts swell with pride. It is indeed even more inspiring! With more and more professional athletes fighting for the right to compete with a hijab and have an equal playing field, it is incredibly exciting to see them step up on the podium and receive the recognition they truly deserve. But unfortunately, hijabi athletes are not often in the limelight, and that is why it is important to highlight them. Let’s have a look at some of the hijabi women who have successfully entered the world of sports.

She was the first amatur boxer in New South Wales to fight wearing a headscarf. Raianne admired her elder brother after watching him train and wanted a similar kind of independence to be able to defend herself.

She was told to remove her hijab during a fight or never compete in a sanctioned bout. She questioned the quthorities about why she had to make such a choice knowing that she can box without running afoul of her beliefs as a Muslim woman. Her journey is truly inspiring and we are lucky to have passionate youngsters like her. 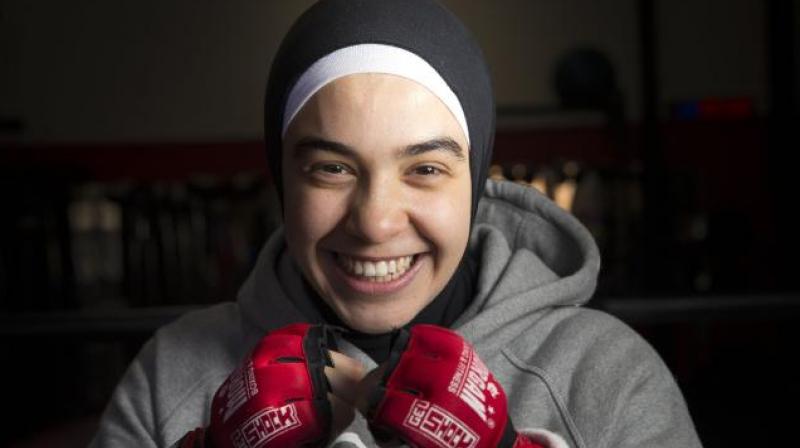 It is not tough to recognize her. Ibtihaj made history when she became the first Muslim woman to wear a hijab to represent the United States at Olympics. She was also named in Time Magazine’s 100 most influential list and is an important figure in global discussion.

She speaks regularly in keynote, fireside, and panel formats around a variety of topics including diversity and inclusion, technology, leadership, activism, overcoming obstacles, fashion, beauty, and entrepreneurship. She has also appeared in a range of media outlets including TIME, CNN, Forbes, ELLE, Pop Sugar, New York Times, and Essence.

A hijab wearing doll was released by Barbie, modelled in her likeness.

"I’m proud to know that little girls everywhere can now play with a Barbie who chooses to wear hijab! This is a childhood dream come true,” says Ibtihaj.

Growing up, Zahra Lari was not permitted to join ice-skating competitions because of the revealing nature of standard outfits. Now, ironically, she is the first woman to take part in an international figure skating competition wearing a hijab.

During the 2012 European Cup in Canazei, Italy, she was the first skater to compete while wearing a hijab due to which the judges deducted a point for an outfit violation. Post this incident, she campaigned for a change to the regulations.

She began skating after watching the Disney movie “Ice Princess”. This young skater always had greater ambitions than just representing her country at the Winter Olympics. She also set her eyes on competing at the Four Continents Figure Skating Championships and the World Championships.

The International Weightlifting Federation (IWF) rules previously said that an athlete’s knees and elbows must be visible so that the officials can determine if a lift is correctly executed. But Kusoom was cleared to compete in accordance with her Muslim faith after IWF allowed athltes to wear a full body unitard under the customary weightlifting unifrom.

She is a leading inspirational figure, an expert on women's sports, and a mental health advocate. A self-made sports pioneer, her work has been recognized by prominent leaders, global brands, and international media.

Amna is a weightlifter from the UAE with achievements across many international competitions, like the Arnold Sport Festival and the IWF in Asian Interclub Championship. She was awarded with six gold medals and three silver in the Arab, West Asian, and Asian categories.

She started her career as a journalist who moved to sports to improve her mental and physical health. Amna became the first Emirati female individual athlete to be signed by Nike in 2015. This partnership led to the creation of Nike Pro Hijab. Amna acted not only as an inspiration behind this revolutionary product by Nike but was also consulted regarding the needs of Muslim female athletes.

Besides this, Amna has also featured in the international bestseller Good Night Stories for Rebel Girls in the list of 100 global inspirational women. Her inspirational story as a weightlifter earned her a spot in the book as well as in the hearts of kids. She receives weekly messages and emails from parents and kids around the world. She is indeed an inspiring figure.

As a child, she had no interest in sport and it is unsurprising as girls aren’t encouraged to play sports in Iran where she was born and lived from the age of ten to fifteen. In the schools I went to, phys-ed was quite weak,” she says. “It was never a seriously sporty session. It was more girls sitting around a courtyard reading books” says Shirin.

She does not don the hijab in her day to day life but as a part of the Iranian regulations that needs females athletes to be fully covered, she was inclined to find athletic wear that would meet the standards. She hopes that clothes do not remain a barrier to participation in any kind of sports.